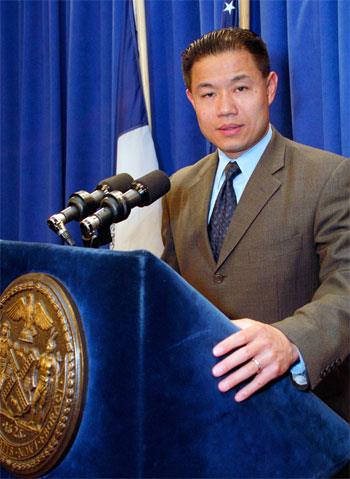 "We estimate that more than 100,000 New Yorkers with serious medical conditions would benefit if medical marijuana were legalized — and that gives us 100,000 good reasons to do it," said Comptroller Liu. "Marijuana's medical value is well-established, but it is still routinely denied to patients and researchers. It's time for that to change, and New York City government can play a role in reshaping our understanding of marijuana's medical uses. We should leverage our City's tremendous medical, bioscience, and academic resources to lead the way in medical marijuana research in order to make a meaningful impact on suffering for years to come." 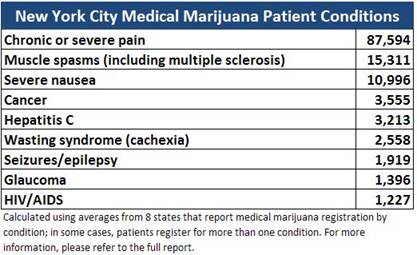 Seeking to quantify the number of New Yorkers who could benefit from such a program, the Comptroller's office estimated that 105,527 New York City residents suffering from serious ailments could be helped by medical marijuana if it were legalized by the state legislature. The figure is a conservative estimate derived by calculating the medical marijuana patient share of the population in the 14 states with significant-sized medical marijuana programs and extrapolating the rate (1.27%) to New York City's population. That group would include roughly 88,000 suffering from chronic or severe pain, 15,000 with muscle spasms or multiple sclerosis, and 11,000 with severe nausea. Other qualifying conditions would include cancer, seizures, wasting syndrome, HIV/AIDS, and glaucoma.

Comptroller Liu recommended that the state Legislature require insurance companies to cover medical marijuana, a provision lacking in the bill that Albany considered in June 2013. (That bill passed the New York State Assembly but died in the Senate.) Medical marijuana is typically not covered by insurers, making it available only to patients who can afford to purchase it out-of-pocket.

The report also finds that New York City is equipped to become a worldwide center for marijuana-related research because of the city's robust medical, scientific, and academic resources. According to the City's Economic Development Corporation, New York City is home to the largest bioscience workforce in the country, nine major academic medical centers, the world's largest concentration of academic institutions, and a number of major pharmaceutical companies. In order to capitalize on those assets, the report recommends establishing a Medical Cannabis Research Fund and financing City-owned and -operated medical marijuana greenhouses.

To ensure an adequate supply of high-quality marijuana for medical and research purposes, the report proposes that the City provide the New York City Health and Hospitals Corporation with the necessary capital funds to construct one or more medical greenhouses on its grounds or inside its facilities. Given HHC's existing research affiliations and its own 420,000 member "MetroPlus" health plan, it is uniquely positioned to play a leadership role in medical marijuana research.

Under the proposal, the City would provide $5 million in start-up funds and match up to $50 million of private donations on a dollar-for-dollar basis. The ultimate goal would be to finance up to $100 million of medical marijuana research over the next five years by partnering with private-sector companies, academic institutions, and hospitals. Areas of research could include: