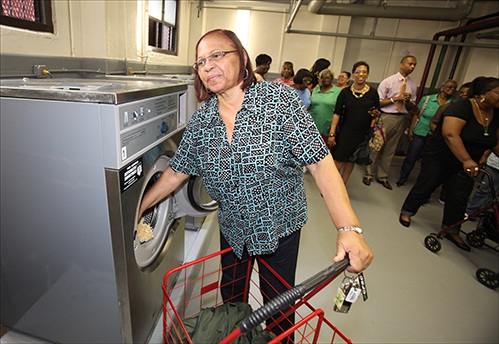 As Mary Andrews, President of NYCHA's Farragut Houses Tenants Association, stepped up to the ribbon obstructing the basement entrance at 201 Sands St. in Brooklyn, she had two requests for the residents gathered behind her: First, she asked that they enjoy and make use of the new laundry room facilities which were about to be unveiled; Second, Ms. Andrews called for respect and proper treatment of the furnishings. "This is for you," Ms. Andrews proclaimed moments before cutting the ribbon at the New York City Housing Authority's (NYCHA) newest laundry room facility.

At the re-opening ceremony of the Farragut Houses Laundry Room on Sept. 6, NYCHA residents were eager to take ownership of their new amenities. "We've been 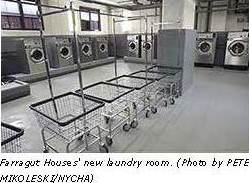 waiting a long time," said resident Sarah Jacocks. "We have a lot of seniors, and it's very difficult for them to get to a Laundromat."

Despite delays in the completion of the new facilities, they appear to have been well worth the wait. Spread out over a space equivalent to multiple large living rooms, ten washing machines and ten dryers sit in neat rows, waiting to be used by NYCHA residents. Beyond the machines, other standard laundry tools such as sinks, tables, counters, and laundry carts could be seen. "It's a work in progress but it turned out very well," said Farragut Houses Superintendent Carlos Falu. "It's something that the residents really needed for a while," he added. "There are no other laundry rooms around here."

Many Farragut Houses residents noted that the closest laundry facilities are on Myrtle Ave., which is at least 20 minutes or more away from the NYCHA development when travelling by foot. The lack of accessible of laundry rooms was a key driver in completing the re-opening of the facilities for NYCHA residents. With the new laundry room, seniors and other Farragut Houses residents have a central, convenient location to take care of laundry errands. 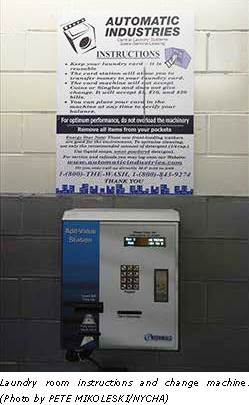 "It's the best thing that has happened to a lot of developments," said NYCHA's Resident Board Member, Victor A. Gonzalez about the new laundry room. He also gave a laundry list of other benefits: "It's safer; security will be better because it's within the development; people know each other, they can come in groups and it's not just washing your clothes. It's also the camaraderie, a little 'let's get together and talk and make plans," Mr. Gonzalez explained.

NYCHA Board Member Gonzalez and others noted that the re-opening of the laundry facilities at Farragut Houses are a testament to the implementation of Plan NYCHA , NYCHA's strategic roadmap and vision for New York City public housing, established under the guidance of NYCHA Chairman John B. Rhea . Plan NYCHA's Core Imperative #9 calls for better efforts to meet resident needs, with a focus on becoming "a customer-focused organization that strives to make each interaction a positive experience." The laundry facilities are another effort by NYCHA to honor that commitment. "Without a doubt, it fits right into Plan NYCHA," said Board Member Gonzalez. "This is what we need to do."