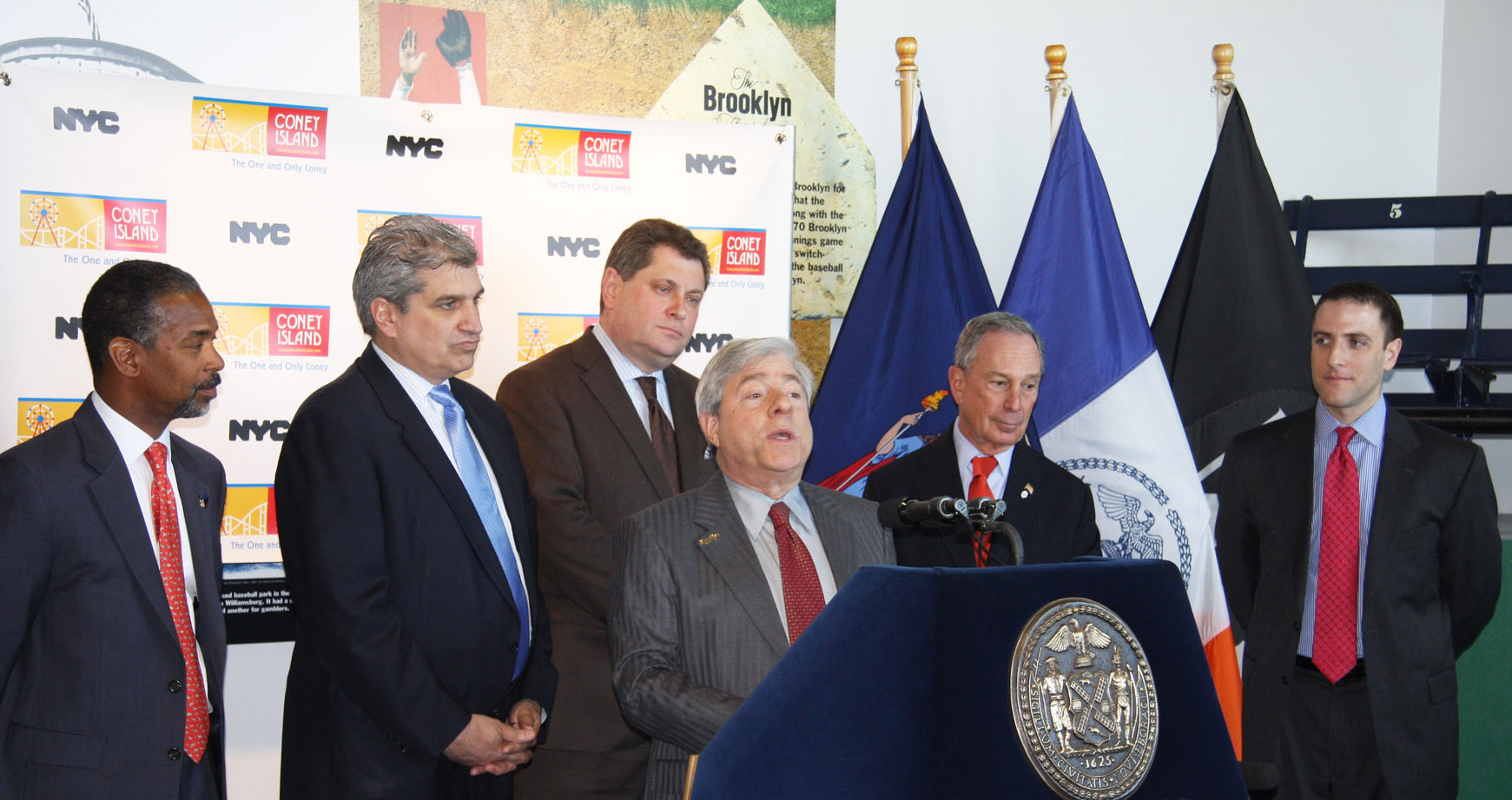 "To put it simply, jobs are 'job one.' And because not everyone can get a Ph.D or work in the hi-tech jobs of tomorrow, these are the perfect jobs for today--for our young people or anyone looking to make ends meet during these challenging times," said BP Markowitz. "As part of the Coney Island Revitalization Plan, I called for the local community to get preference when it comes to jobs, affordable housing and all the rewards that come with revitalization. I am thrilled that Mayor Bloomberg and the EDC's HireNYC program are doing just that--with local residents filling nearly half of all positions last year."

Press Release from the Office of the Mayor:

For Third Year in a Row, Job Fair Events Will Result in Employment for Hundreds of Local Residents

For Summer 2012, Two New Acres of Amusements Are Coming to Scream Zone, Including a Go-Kart Track and a 110-Foot Free-Fall Ride

Mayor Michael R. Bloomberg today announced the launch of the City's recruitment efforts to fill over 450 jobs in this summer. The annual job fair, where local residents are recruited to work in the amusement district, are a key component of the City's efforts to connect local residents with jobs in their communities. With more than 450 open seasonal jobs, in addition to more than 150 returning employees, there will be over 600 jobs at Coney Island filled this summer thanks to outreach by the City and participating employers. The job fair event held today was the first of four that will take place this year to fill positions in fields including customer service, retail, food and beverage service, ride and game operations and ticket sales. The outreach efforts are being led by New York City Economic Development Corporation's HireNYC program, which connects the City's workforce development services to economic development projects, in coordination with the Development Corporation, New York City Housing Authority, Department of Small Business Services, Councilmember Domenic M. Recchia, Jr. and a number of community organizations. Mayor Bloomberg made the announcement at MCU Park, where he was also joined by Brooklyn Borough President Marty Markowitz, Councilmember Recchia, Assembly Member Alec Brook-Krasny, New York City Economic Development Corporation President Seth W. Pinsky, New York City Housing Authority Chairman John B. Rhea and Central Amusement International Chairman Alberto Zamperla.

"Everyone knows that is back and better than ever," said Mayor Bloomberg. "But the new parks and attractions aren't just fun for the summer - they mean hundreds of jobs for local residents. That's good news for New Yorkers who are looking for work and great news for our City's economy."

Last summer was one of the most successful summer seasons on record for Coney Island with more than 640,000 visitors taking over two million rides at Luna Park and Scream Zone. It marked the second season for , which features 19 traditional and state-of-the-art rides, and the inaugural season of Scream Zone, which features four cutting-edge thrill rides. This summer the amusement park will continue to expand with the addition of nearly two acres of new amusements to Scream Zone including a 24-cart Go-Kart track and a 110-foot free-fall ride called the Boardwalk Flyer.

" is poised for another great summer for New Yorkers and visitors from around the world," Deputy Mayor for Economic Development Robert K. Steel said. "Today's job fair will help make sure that hundreds of New Yorkers get connected to the jobs that are being created at ."

"This third annual job screening in is a testament to the strong economic recovery our city is making," said Council Speaker Christine C. Quinn. "When the City Council voted to approve the rezoning of this area in 2009, we set out to create more jobs while preserving the historical significance of . After a record setting year for attendance at , it's vital that we make sure we have ample staff to keep this historic and memorable attraction up and running to its full potential. I applaud the EDC for taking a lead on this and for continuing to target the local members of the community for these jobs."

"To put it simply, jobs are 'job one.' And because not everyone can get a Ph.D or work in the hi-tech jobs of tomorrow, these are the perfect jobs for today--for our young people or anyone looking to make ends meet during these challenging times," said Brooklyn Borough President Marty Markowitz. "As part of the Coney Island Revitalization Plan, I called for the local community to get preference when it comes to jobs, affordable housing and all the rewards that come with revitalization. I am thrilled that Mayor Bloomberg and the EDC's HireNYC program are doing just that--with local residents filling nearly half of all positions last year."

"The City's plan to fill over 450 jobs this summer in Coney Island is proof that the City is making good on its promise to bring new employment opportunities to the 50,000 residents who live in Coney Island all year round," said Councilmember Domenic M. Recchia, Jr. "This summer, as local residents become an even more integral part of Coney Island's rich history, together we will usher in a new era, one that will add a new layer to the colorful legacy of Coney Island and breathe new life and prosperity into our community."

"Many thanks to the Mayor for our third year of job screenings on site in ," said State Senator Diane Savino. "600 jobs will be filled here thanks to the partnership between private industry and government that is revitalizing 's playground, ."

"As a former business owner, I know the important role that the City's job screenings provide in ; for both the business owners and the local residents," said Assembly Member Alec Brook-Krasny. "Representing my constituents in the New York State Legislature, I helped pass new law, creating jobs and allocating funds for employment programs. This year, 25 million dollars will go toward the Summer Youth Employment Program; 12 million dollars will be available for critical training, mentoring and job-placement programs for our inner-city youths.  Now, companies that hire underprivileged youths, aged 16 to 24, will get a tax break and additional credit for keeping those employees. I'm proud to witness the collaboration between the City and on the improvements here in . It's a great satisfaction, knowing that our children and our children's children will enjoy the great in their lifetime, as our generation does and the generations before us did."

"The ongoing revitalization of has resulted in millions of dollars in private investment, record attendance at the amusement parks, and most importantly, hundreds of new jobs for local residents," said New York City Economic Development Corporation President Seth W. Pinsky. "Thanks in part to our annual recruiting efforts, more residents than ever will be aware of the many new jobs available, giving more a chance to benefit from the area's continuing economic growth."

"The New York City Housing Authority is proud to partner with the EDC, SBS, and our resident leaders, as well as others, to connect NYCHA residents to local economic development and employment opportunities for the third year in a row," said NYCHA Chairman John B. Rhea. "Last year, along with our partners in private, public, and nonprofit sectors, and through extensive efforts in getting the word out in public housing developments, NYCHA placed more than a thousand of its residents into jobs, including more than 500 jobs right here in . Bringing employment opportunities to our residents to help them gain self-sufficiency is a top priority for NYCHA."

"Now in its third year, this recruitment effort has proven a tremendous success, ensuring the rebirth of first and foremost benefits the people who live here," said Valerio Ferrari, president of Central Amusement International. "We are extremely proud to once again partner with Mayor Bloomberg, the NYC Economic Development Corporation, Coney Island Development Corporation, NYC Housing Authority, Department of Small Business Services and Councilmember Domenic M. Recchia, Jr. to provide hundreds of jobs to local residents at , Scream Zone and the Cyclone."

This is the third year the City has held job screenings in , and with nearly half of all open positions filled by local residents last year. In winter 2010, the job screenings helped fill the over 200 new positions that were created by the opening of Luna Park, the first new major amusement park in Coney Island in forty years. Last year, over 1,200 job seekers attended three job screenings, helping to fill over 275 full and part-time seasonal positions at , the new Scream Zone, and the Cyclone Roller Coaster. The program has further expanded this year, with employers from the boardwalk participating for the first time. Taking part in the City's hiring efforts this year are Central Amusement International, Sodexo, Nathan's Famous, Tom's Restaurant, Paul's Daughter, Ruby's, and Brooklyn Beach Shop. All four recruitment events will be held at located at in . The second job screening will be held this Thursday, March 1st from 12 to 6 PM, and the following two recruitment events will take place on Tuesday, April 24th and Thursday, April 26th from 12 to 6 PM.

The on-site job screenings are being led by representatives of the Department of Small Business Services' Brooklyn Workforce1 Career Center. Workforce1 is a service provided by the NYC Department of Small Business Services that prepares and connects qualified candidates to job opportunities in . Through its service, the Workforce1 Career Centers throughout the five boroughs have placed over 31,000 residents into various employment opportunities.

In 2009, the City purchased three parcels of land, totaling 6.9 acres, within the amusement district, and signed a 10-year lease with Central Amusement International to operate and build the new amusement parks on the property. The City has invested more than $6.6 million to support the opening of and Scream Zone. In addition, CAI has invested nearly $30 million toward the construction of the two parks over the last two years. The City has also seen significant progress on a number of key components of the Coney Island Revitalization Plan this past year, including the groundbreaking for of , and the groundbreaking on Coney Island Commons. , a 2.2-acre public open space, will serve as the western entryway to the revitalized amusement district and be home to the restored B&B Carousell, 's last remaining historic carousel. Coney Island Commons will include 195 units of affordable housing and a new state-of-the-art 44,000 square foot YMCA.

The City's Coney Island Revitalization Plan, will preserve and grow the historic amusement area; create a vibrant mixed-use neighborhood with new retail options and nearly 5,000 new units of housing, including 900 income-targeted units; and generate more than 25,000 construction jobs and 6,000 permanent jobs. As part of the plan, the City is investing more than $150 million toward infrastructure improvements in , including upgrading infrastructure and rebuilding large sections of the Boardwalk. Last year, New York City Economic Development Corporation in collaboration with the Department of Environmental Protection, completed an Amended Drainage Plan to guide upgrades to subsurface infrastructure throughout the entire rezoning area, the first phase of which is currently in design and is expected to break ground by the end of 2012. In total, the plan is expected to generate more than $14 billion in economic activity for over 30 years.