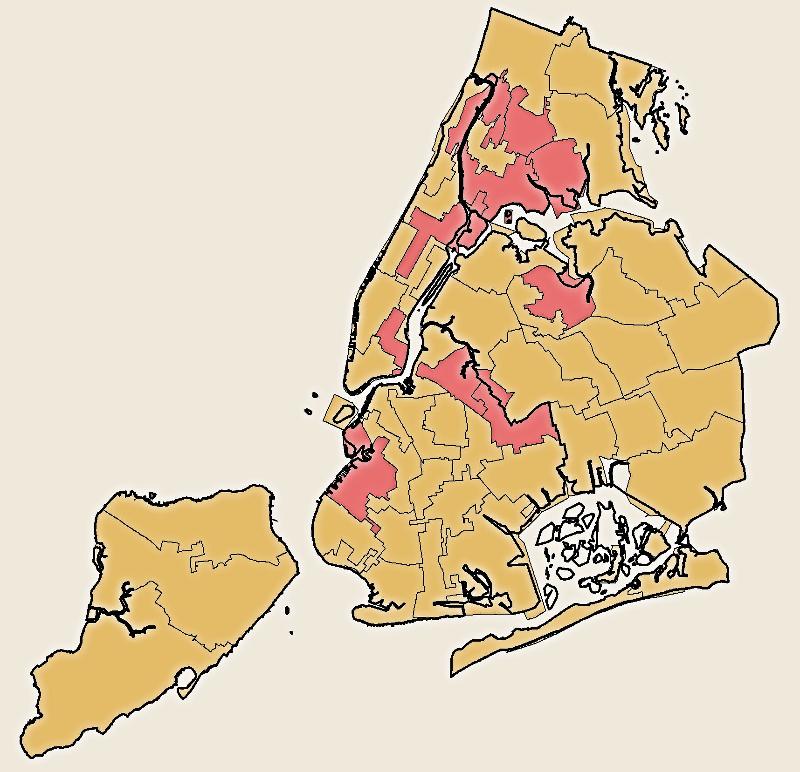 Last night, a number of Latino community organizations held the first citywide nonpartisan brainstorming session on promoting Latino community participation in the redistricting process of the New YorK City Council. Organized by La Fuente, A Tri-State Worker & Community Fund, with the co-sponsorship of LatinoJustice PRLDEF and the National Institute for Latino Policy (NiLP), about 25 community activists from throughout th city gathered to discuss issues and strategies to protect and strengthen the voice of Latino voters in determining their future representation o the New York City Council.

The session opened with an overview by political scientist Angelo Falcón, president of NiLP, on the NYC Council districting process. He led a comprehensive discussion of the findings of the NiLP report, Latinos and NYC Districting, 2012: An Introduction , through a PowerPoint presentation . A printed version of the report was distributed at the meeting (a limited number of copies is available from La Fuente by contacting dmercado@lafuenteinc.org ).

1. The history of the NYC Council districting process since 1991, making this the third time that the NYC Districting Commission has been tasked with redistricting the Council.

2. Latino demographics and their impact on the process.

3. The role and powers of the 51-member NYC Council and a profile of the current 11 Latino Councilmembers, including the strong representation of Latina women on the Council.

4. The districting process and redistricting criteria, such as the role of the federal Voting Rights Act (VRA), communities of interest, one person-one vote, and other criteria. This included distributing the latest version of the NYC Districting Commission's calendar of public hearings and meeting ( click here for a copy ).

5. Districting process issues, such as the underrepresentation of Latinos on the NYC Districting Commission, questions about the indepeedence of the Commission, and other issues.

6. A review of current NYC Council district maps looking at the concentration of the Latino voting age population in each district and the role of population shifts at the district level.

This was followed by an in-depth discussion of the major redistricting challenges in the city's Latino neighborhoods throughout the city, led by John Garcia, Redistricting Manager of LatinoJustice PRLDEF and Lucia Gomez-Jimenez, Executive Director of La Fuente. The neighborhoods and districts discussed were: 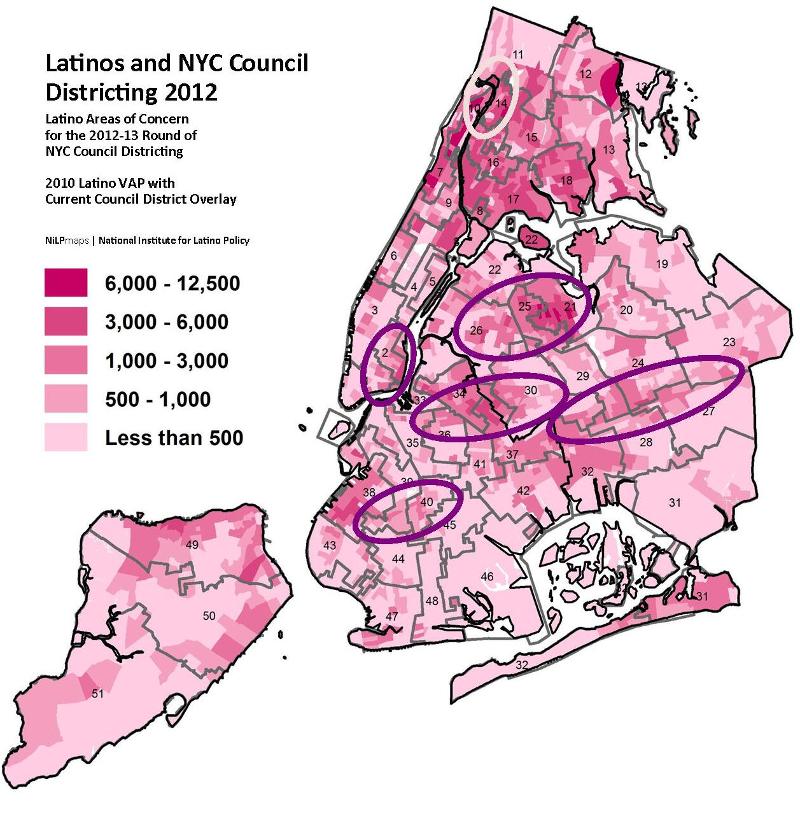 Garcia reported that the Unity Coalition of the New York Voting Rights Consortium, of which LatinoJustice and NiLP are founding members, would be releasing a proposed citywide map of redistricting NYC Council districts in the next day or so. He explained that this was the result of the work of a collation of Latino, Black and Asian organizations that sought to represent the best interest of all of these communities of color in the process. The organizations involved in this process include the Asian American Legal Defense and Education Fund, the Center for Law and Social Justice, Latino Justice PRLDEF and NiLP. For further information and to comment on the NYC Council Unity Plan, you can contact John_Garcia@latinojustice.org  or (212) 739-7513.

Gomez-Jimenez also led a discussion of strategies for increasing Latino participation in the process. Those present at the meeting committed themselves to take the message to their neighborhoods and the Latino media, and promote the presence of Latinos at future public hearings of the NYC Districting Commission. It was pointed out that the Latino media has done a poor job of covering this issue and it was agreed that Latino community newspapers and other media would be contacted. One participant indicated that it was interesting that El Diario-La Prensa recently had an editorial criticizing the Latino community for not being more involved in this redistricting process, but failed to hold themselves responsible for not their own poor coverage of this issue on their pages. However, the message seems to have gotten to El Diario-La Prensa, since they covered the issue in their newspaper today .