Thanks to you we have won round one in the battle to take back our country. Today is a huge step forward for those of us who believe in American exceptionalism and are willing to fight to preserve it for future generations.

Now we must focus on the way forward and the November election ahead.

I am counting on you - those of you who believed in me when no one else would, when the pundits laughed and said it couldn't be done, when the "experts" wrote us off as a lost cause, and when the establishment chose the easy route. Today, I'm asking you to once again drive this campaign to success from the bottom up. We've done it before and we can do it again!

Since I launched this campaign a year ago, I have run on the principles I hold dear, the issues concerning Floridians, and the ideas I believe will help get our nation back on track.  This was the case when I was over 40 points down in the polls, it's true today, it will be true through November, and it will be true when I get to Washington.  I am a Republican because it is the natural home for all Americans who believe in limited government, individual freedom, a strong defense and traditional values.  I entered this race because I believe no other candidate can be trusted to go to Washington and stand up for these values.

Watch a message from Marco: 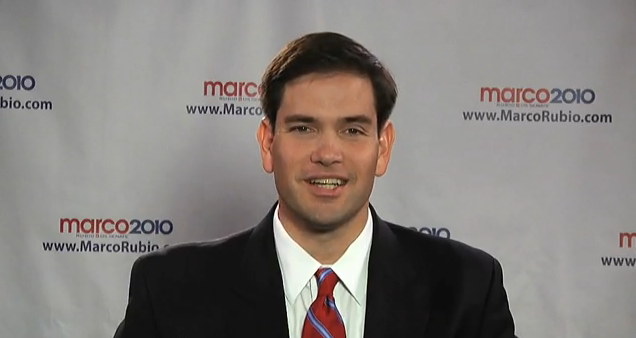 Governor Crist still doesn't get it; this race is not about conservative vs. moderate, Republican vs. Democrat or, now, Republican vs. Democrat vs. Non-Party Affiliated.  This election's outcome was never going to hinge on whether he chose to run as a Republican or not.  This race is a referendum between the limited government, free market American identity I will fight to preserve versus the costly and intrusive big government agenda that both Governor Crist and Congressman Meek support.  This race is not about doing whatever it takes to win in November.  It's about earning the privilege and responsibility to work boldly in the U.S. Senate to ensure future generations inherit a stronger and more prosperous America.  What party or non-party you affiliate with is far less consequential than the principles and policies that will define America for decades to come.

Whereas yesterday my primary opponent was one supporter of wasteful stimulus spending, tax increases, cap-and-trade energy taxes, liberal judges and abortion, I now look forward to debating issues and ideas with Governor Crist and Congressman Meek, who share the same unhealthy appetite for more government, more spending and higher taxes.

As the campaign enters this new phase, I will continue working hard to earn the trust of all Floridians who believe in limited government and recognize that Washington's spending and intrusion in our lives is out of control.  I will continue running on the principles, issues and ideas that have brought us to this point and that I believe are needed in Washington more than ever.

But today, I need your help to stand united in the face of politics over principles.

Our energized supporters believe as passionately as I do in our message and are the main reason we stand here today. But now we must refocus our efforts. It will be a long and unpredictable campaign against one candidate who has proven he will say or do anything to win and another who has been part of the liberal dynasty since birth.  With two opponents now, it is time for us to double our efforts and build our grassroots army for a November victory .

As I prepare for the general election now, will you help me by donating what you can to our cause? This campaign is proof that victory is achieved one donation, one supporter and one voter at a time. With your continued help, I'm confident our message of principled conservative values will prevail in November.