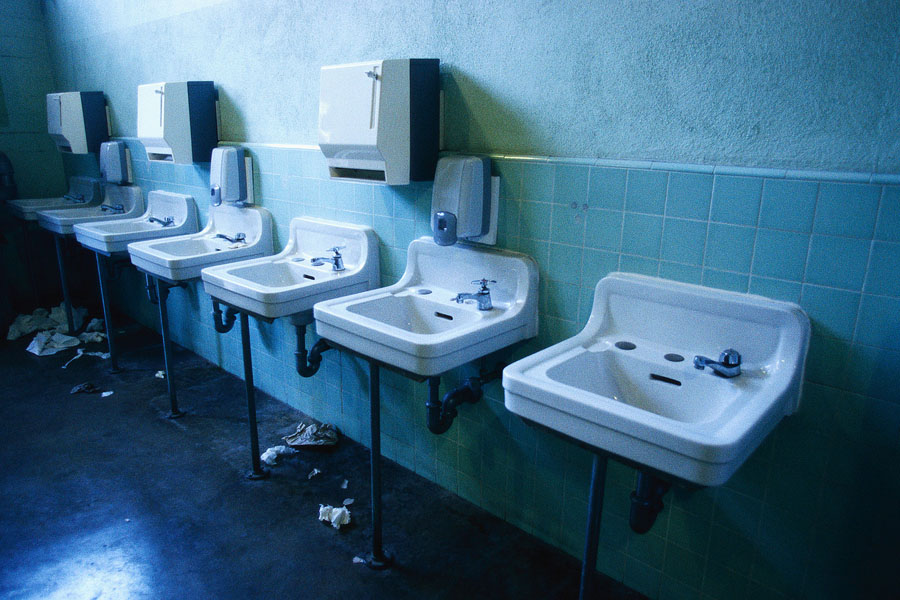 With all this news coverage about people getting arrested for hanging out in public toilets, we were taken aback by a press release issued by The Soap and Detergent Association .

Apparently, during the week of August 17 to August 25, 2007, a bunch of researchers were stationed in six public toilets in four major U.S. cities and "discreetly observed" the "washing habits" of some 6,076 adults.

According to the report, San Franciscans were the "dirtiest," while Chicagoans were the cleanest. Here's how the numbers racked up:

Of course, women (88%) fared significantly better than men (66%). But, overall, the number of people who demonstrated appropriate hygiene has reportedly dropped a total of 6% since 2005.

We can't figure out which is worse: the fact that a large chunk of the American population doesn't feel it's necessary to wash their hands after going to the bathroom, or, that we've got a bunch of researchers in public toilets throughout the nation "discreetly observing" those slobs?

To download a copy of the complete report, please use this link: A Survey of Handwashing Behavior (September 2007)

To download a copy of the Association's press release, please use this link: Hygiene Habits Stall: Public Handwashing Down (September 17, 2007)

Here's a copy of the entire press release:

Chicago, IL – September 17, 2007 – When it comes to washing with soap and water, some Americans seem be slipping up.

In an observational study sponsored by the American Society for Microbiology (ASM) and The Soap and Detergent Association (SDA), slightly over three-quarters of men and women (77%) washed their hands in public restrooms – a six percent decline from a similar study conducted in 2005.

Yet in a separate telephone survey, 92% of adults say they wash their hands in public restrooms.

The results were released during the annual observance of National Clean Hands Week.

On behalf of ASM and SDA, Harris Interactive® observed the behavior of 6,076 adults in public restrooms and recorded whether or not they washed their hands. The research was conducted in four cities and at six different locations: Atlanta (Turner Field), Chicago (Museum of Science and Industry, Shedd Aquarium), New York City (Grand Central Station, Penn Station), and San Francisco (Ferry Terminal Farmers Market). These are the same locales used in the 2005 ASM/SDA study.

"Gender differences aside, hand hygiene is a serious matter," said ASM spokesperson Dr. Judy Daly. "According to the Centers for Disease Control and Prevention, the single most important thing we can all do to keep from getting infectious diseases and spreading them to others is to clean our hands." Daly is the Director of the Microbiology Laboratories at the Primary Children's Medical Center, Salt Lake City.

"There's no doubt about it – we need to do a better job of washing with soap and water," said Brian Sansoni, SDA Vice President of Communication. "Getting beyond the grossness factor here, we need to be smarter about our health and take the 20 seconds to lather up. And if soap and water aren't available, reach for the hand sanitizer or the hand wipes."

Of all those observed, adults in Chicago came out on top when it came to handwashing: 81 percent lathered up. New York turned out to be the "second city" in this study, with 79 percent washing up, followed by Atlanta (75%) and San Francisco (73%).

Men really strike out when it comes to handwashing at sporting events. Only 57 percent of the guys were observed washing their hands at Turner Field in Atlanta (the lowest figure at any of the locales). On the other hand, women hit a home run: 95 percent were observed cleaning their hands (the highest percentage observed in 2007).

Worst of the Women Ties the Best of the Men

The cleanest men were at a place with a lot of water: Chicago's Shedd Aquarium (81 percent observed handwashing). This equals the lowest percentage observed among women – also at Shedd Aquarium.

Self-Reported Hygiene Habits: Same As It Ever Was

Americans' self-reported hygiene behavior in 2007 remains consistent with what past surveys show. Among 1,001 men and women interviewed via telephone in 2007, 92 percent say they always wash their hands after going to a public restroom and 86 percent say they do likewise after using the bathroom in the home. In 2005, those figures were 91 percent and 83 percent, respectively.

Nearly three-quarters (73%) say they always wash their hands after changing a diaper (same as two years ago). Seventy-eight percent say they always hand wash before handling or eating food (compared to 77% in 2005).

Only one-third (34%) of respondents say they always wash their hands after coughing or sneezing (up from 32% in 2005).

"Many cases of colds, flu, and foodborne illness are spread by unclean hands, and these diseases are responsible for billions of dollars each year in health care expenditures and productivity losses in the United States," Dr. Daly pointed out. "Worldwide, infectious diseases remain the leading cause of illness and death."

"We need to remember the common sense times to clean our hands," said SDA's Sansoni. "For example: after using the bathroom, after coughing or sneezing into our hands, before food preparation and when we eat, after changing diapers, after petting your dog or cat, and after taking out the trash."

The American Society for Microbiology maintains a website, www.washup.org , that has downloadable educational materials about hand hygiene as well as results of the current and previous handwashing surveys.

The Soap and Detergent Association has updated hand hygiene-related news and educational materials on its website at www.cleaning101.com/handhygiene .

ASM and SDA are members of the Clean Hands Coalition, a national alliance of public and private partners working to create and support coordinated, sustained initiatives to significantly improve health and save lives through clean hands. The coalition's website is www.cleanhandscoalition.org .

Harris Interactive® conducted an observational study on behalf of the American Society for Microbiology and The Soap and Detergent Association in August 2007. They observed the behavior of 6,076 adults (of whom 3,065 were men and 3,011 were women, who appeared to be age 18 and older) in public restrooms located at major public attractions in the U.S., and recorded whether or not they washed their hands after using the facilities. The research was conducted in four cities and at six different locations:

Observers discreetly watched and recorded whether or not adults using public restrooms washed their hands. Observers were instructed to groom themselves (comb their hair, put on make-up, etc.) while observing and to rotate bathrooms every hour or so to avoid counting repeat users more than once. Observers were also instructed to wash their hands no more than 10% of the time. The 2007 observational research results can be directly compared to the 2005 findings (6,336 observations) as they took place at the same locations using the same methodology.

This study was conducted by telephone within the United States by Harris Interactive® on behalf of ASM and SDA between August 17 and 20, 2007 among 1,001 adults ages 18 and over. Results were weighted for age by gender, race/ethnicity, region, household size, and education where necessary to align them with their actual proportions in the population. Harris Interactive® avoids the words "margin of error" as they can be misleading. All that can be calculated are different possible sampling errors with different probabilities for pure, unweighted, random samples with 100% response rates. These are only theoretical because no published polls come close to this ideal.

The American Society for Microbiology ( www.asm.org ) is the world's largest scientific society of individuals interested in the microbiological sciences, with more than 43,000 members worldwide. The mission of the ASM is to advance the microbiological sciences as a vehicle for understanding life processes and to apply and communicate this knowledge for the improvement of health and environmental and economic wellbeing worldwide. The ASM is located at 1752 N St. NW, Washington, DC 20036.

The Soap and Detergent Association ( www.cleaning101.com ), the Home of the U.S. Cleaning Product IndustrySM, is the non-profit trade association representing manufacturers of household, industrial, and institutional cleaning products, their ingredients and finished packaging; oleochemical producers; and chemical distributors to the cleaning product industry. SDA members produce more than 90 percent of the cleaning products marketed in the U.S. The SDA is located at 1500 K Street, NW, Suite 300, Washington, DC 20005.